One more strike against meat

In all the research that I’ve delved into over the last several months, I’ve learned of many negative results that the commercial farming has on our world.  The extensive list includes harm to our health, environmental damage, and mistreatment of animals and slowly but surely has been pushing me closer and closer towards full-time vegetarianism.

And an article by Ezra Klein brings up yet another compelling point: “if meat were to become more expensive, and folks began trending towards plant-based diets, world hunger would be substantially alleviated.”

More in the words of the author:

“It takes about 16 pounds of grain to “produce” one pound of animal flesh. That’s grain, of course, that the poor can’t eat, because it’s bought by richer countries in order to feed livestock. And what grain remains is pricier, because the market for grain is tightened by the 756 million tons going to animal feed.  Animals also need land. Even if they’re penned up in industrial agriculture settings. And it turns out they need a lot more of it than do most crops. The below graph tracks usable protein yield per acre for a host of foods. Meat doesn’t fare well.” 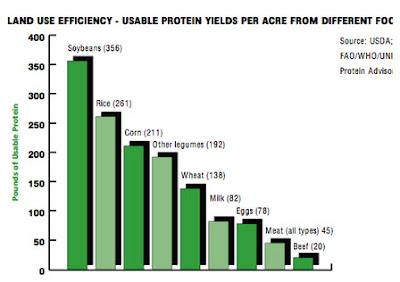 Now, I’m not a food scientists or an economist.  Or that great at math.  But here’s how I understand it.

It seems that eating less meat is in everyone’s interest but the guys with the fat wallets, i.e. the guys running the show.  And perhaps that is the reason why meat consumption has not descreased and so few are aware of the horrible conditions taking place at CAFOs.  There are a lot of people with a lot of money who are working very hard at presenting a different reality to the consumers.

Fortunately, as animal welfare and food safety continue to remain hot topics and receive more visibility in the main stream media, the more educated consumers will (hopefully) make purchasing decisions that will force the farming industry to make changes.  Otherwise, they’ll be slaughtering not only animals on their factories, but also their revenues and margins.